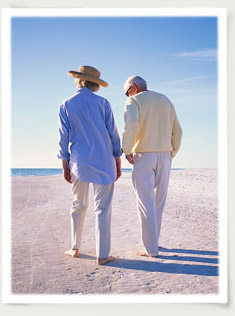 Why do women live longer than men?

Being the bigger and stronger of the sexes, one might assume that men would normally live longer, healthier lives than women. The opposite is true, however. In the US, for example, women outlive men by an average of 5-7 years and, according to the World Health Organization in 2006, this pattern is true for all countries on earth.

While lifestyle choices certainly play a role in the disparity, some researchers argue that genetics may also be a factor. After all, the tendency for females to outlive males applies not only to humans, but for all mammal species.

Factors that may explain why women live longer than men

A recent theory is that, in general, smaller individuals in a species live longer. Perhaps this is because their development involves fewer cell doublings and a reduced demand for ongoing tissue regeneration over a lifetime. Supporting this theory is the fact that age-related diseases generally appear earlier in men than in women.

This is probably where the dramatic differences between male and female longevity are determined:

Aging facts from around the world

According the US Census Bureau, International Data Base, the country that can boast of the longest life expectancy (83.5 years) is Andorra where females can expect to live 86.6 years and males 80.6 years.)

The longest-lived female and male ever authenticated were 122 years, 164 days for a French woman and 115 years, 252 days for a Danish/US man.

The dramatic increase in life expectancy that occurred in the early 1900's came about primarily because of improved hygiene attributed to the discovery of the "germ theory of disease", better understanding of nutrition, and the control of infectious diseases through medications such as antibiotics. Increases in life expectancy that occurred in the latter part of the 1900's can be attributed primarily to better prevention, diagnosis and treatment of chronic, adult diseases such as heart disease and stroke.

Going forward, it is projected that by the year 2050, life expectancy for American women will be increased by approximately 4 years, to 83.4 years. The disappointing news is that this number is still less than the current (2007) life expectancy of women in Japan (86.0 years), France (84.4 years) and Australia (83.8 years).

Next: Men's tips for living a longer, healthier life

Join in the conversations:
+ Add your comment for Why Do Women Live Longer Than Men?
Showing comment(s)
Dan
January 6, 2015
Good news (if you are a man)! The gender longevity gap is actually closing: http://blog.allstate.com/living-longer-men-are-closing-the-gender-longevity-gap/
▲ jump to top of article
Other Popular Posts