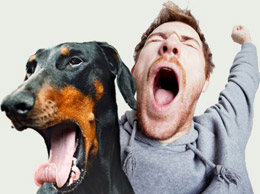 What makes us yawn: The mystery of yawning

All humans yawn. So do most mammals and even some birds and reptiles. Because yawning is not a serious problem, however, little research has attempted to uncover exactly why we yawn.

Here are a few things we know about mammalian yawning:

Theory 1: People yawn when they are bored or tired.

When we breath more slowly, such as what happens when we're tired or bored, the oxygen in the blood decreases and carbon dioxide levels increase. A yawn may be the body's way of gaining more oxygen as if "taking a deep breath." The problem with this theory is that research has not supported it. If anything, the research suggests there is no relationship between carbon dioxide levels and yawning. Research concluded that yawning and breathing may be controlled by two separate mechanisms.

Both yawning and stretching increase blood pressure and heart rate and also flex the muscles and joints. Have you ever observed what happens when you try to stifle a yawn? It's like an unfinished, unsatisfying stretch. For reasons still unknown, in order to produce a good yawn, the face and jaw muscles must be stretched to a certain degree.

Researchers have found that we yawned more often in warm rooms. We also yawn more with a room-temperature towel placed on our head than if the towel is cool. People who breath through their noses are also less likely to yawn.

Why do yawns seem to be contagious?

It could be thay yawning served a social function early in our evolutionary history. When one member of a group yawned to signal some sort of change, the rest of the group also yawned. This leftover or "vestigal" response is no longer needed yet yawns remain "contagious."

Animals such as orangutans, and chimpanzees, who are capable of self-recognition and mental state attribution are highly susceptible to contagious yawning.

Modern science has brought us a long way toward solving the mystery of yawning but, for now, the exact mechanism of yawns will remain an unsolved mystery.

Join in the conversations:
+ Add your comment for What Makes Us Yawn
▲ jump to top of article
Other Popular Posts